Since last week we have spent quite some time debugging Samsung SMRP6400/SMDK64X0 IIC drivers, I thought I might share with one particular example here. It is both a good showcase of the hardware/software synchronization issues and since the bugs are in the latest version of the drivers shipped together with the development platforms, it might save someone from additional headaches.

So, while working on the drivers for IIC one of our automated tests to make sure that IIC still works was to write some data on the bus, do an immediate read-back and verify that both data written and read back matches; something similar to this:

However, after we added some IIC read calls from another hardware driver it started spitting fire throwing the following error message:

Now this clearly meant we had a serious problem: the error message was saying that the data does not match, which obviously was not the case as shown by the message text!

Since we were pretty confident about our side of things, as well as the readings from the scope, it seemed like a good time to start looking at the Samsung IIC drivers (and especially s3c64X0_iic_lib.cpp). The driver structure there is pretty straightforward: the first read/write byte on the bus triggers the hardware IRQ, which is mapped to SysIntr triggering a transfer event; then any subsequent call to a read/write function blocks waiting for a transfer-done event, which is triggered when the last byte is read/written in the IST.

Everything looks sane up to the point where a transfer-done event is signalled from the IST (pseudocode, not the original code below, due to the legal issues):

Two major problems with this code are:

That explains the initial test case failure: during the write/immediate read data comparison the data arrives exactly between the if statement and the following printout, thus triggering the error message, but printing the correct data to the output due to the early signal of the event.

In pseudocode it would look similar to:

The lesson of the day (quoting my colleague) is: "The first rule about multithreading - you're wrong". 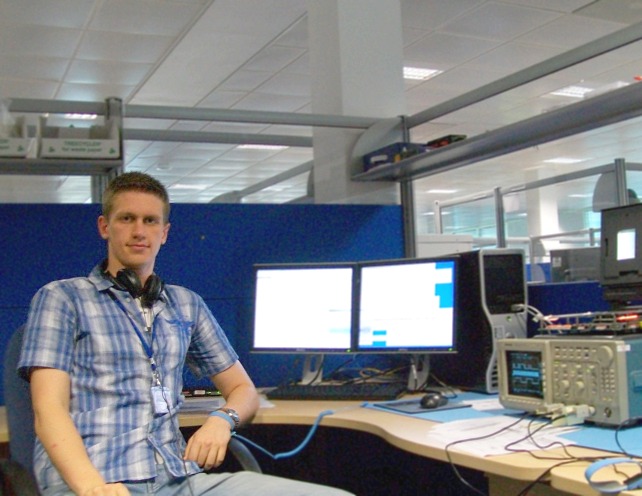