You step in the stream,
But the water has moved on.
This page is not here.
-- Internet Folkore

Rather surprisingly even for me, it has already been over five months since my last post. Writing a thorough and yet succinct account about everything that happened over that time is way beyond my literary abilities, so here's a bullet-point summary about a few things worth mentioning from that period.

Back in June 2012, folks at Computer Science Tripos Part IB (including me) had the opportunity to enjoy four consecutive days of exams. The structure of papers was straightforward: three hours, nine questions (one or two questions per course); five questions had to be answered. 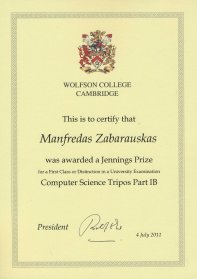 If I could give a single advice to someone who is about to go through this process, it would be "focus on the time". Three hours will not be enough to answer five questions, and there will be almost no time to think about anything if you get stuck. Most likely, the bottleneck in your answers will be the speed of your writing, so don't make a huge mistake by thinking that you will be able to do less revision and figure out things "on the spot". You won't.

At the end of the day, of course, it's not the grades that matter, but... receiving the thing on the left was still nice. 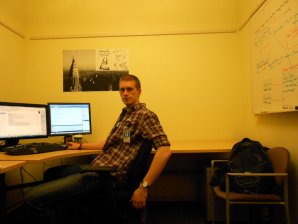 After three days from my last exam I arrived to my office at Microsoft, in Redmond, WA.

Over the summer, I was working as a Software Development Engineer in Test in Microsoft Office team. In particular, I was writing a performance testing suite for the feature that is used across Office and Windows divisions when developing and updating over 50k+ pages of documentation on MSDN. 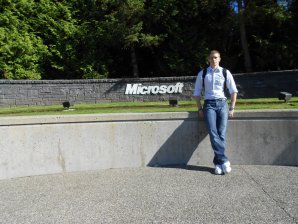 Well, I say "working". The summer was literally packed with events for interns! Starting with the intern day of caring, when we spent a full working day volunteering for the community, and ending with the huge intern celebration involving Dave Matthews and customized Xbox + Kinect bundles for everyone!

And then, there were meetings and talks by senior people in the company. And by senior people, I don't mean my manager's manager. Just to throw in a few names, we heard talks from Andy Lees, Steven Sinofsky and, of course, Steve Ballmer (or as he's known within the company, SteveB). 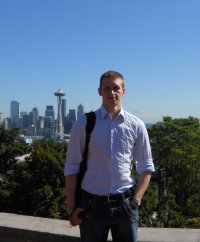 I even had a half-an-hour chat with the head of the Microsoft Office Division, Kurt DelBene - definitely one of my best experiences over the whole internship!

Also, the perks that you get as an intern are incredible: paid flights, subsidized housing, free bike, two weeks of free rental car, gym plan (and if you're around Redmond, WA area - check out the Pro Sports Club). That, and all-you-can-drink soda at work! (OK, so you don't get free food as in some other places, but trust me, you will able to afford food from your intern compensation package). 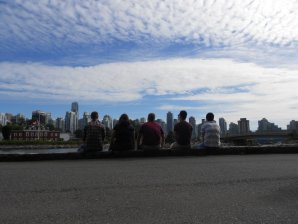 Finally, there are people that you are working with. If you are as lucky as me, then everyone's going to be exceptionally smart, and nevertheless, extremely approachable. I wouldn't have achieved anything over this summer if not for my team; their help and guidance was invaluable. And not only limited to the working environment - the weekend trip to Vancouver, BC was pretty epic, and I already miss our regular Friday basketball games, just outside the office.

However, to make things even better, I have already received an offer for the summer of 2012! If there aren't any major changes, there is a good chance that I will spend my next summer working as a Program Manager intern at Microsoft Office team!

This year me and Ada have decided to go to Turkey. We have spent two final weeks of September in a beautiful Alanya region: the weather (every single day above 30°C/86°F) justified the nickname of the region ("Where The Sun Smiles") and the Mediterranean Sea was simply magnificent. We were also very lucky with the choice of the hotel: two pools, five minutes away from the sea, extremely polite and courteous staff, and great all inclusive food and drinks!

Anyway, a picture is worth more than a thousand words, so here's a few of them. Enjoy!

P.S. Fact: it is possible to get a 500% discount when buying a leather jacket in Turkey. Verified. And it takes only a little bit over two hours of negotiating.