... otherwise known as Part 1A of Computer Science Tripos in University of Cambridge has officially ended.

All in all, a rather enjoyable year. From the introduction to ML by the brilliant Prof. Larry Paulson, to the realms of Discrete Mathematics II (with a wicked a proof of existance of ordinal numbers in the exam); from Algorithms to Software Design, from Digital Electronics to Operating Systems, from Floating-Point Computation to Regular Languages and Finite Automata; and everything in between.

A crash course, but the one that is definitely worth going through.

If you're just about to come to Cambridge (or just starting your part 1A), here are a few simple tips that proved to be helpful for me:

But most importantly - enjoy what you're doing.
Good luck and have fun.

While the Europe is paralyzed by the volcanic ash and I am restrained from coming back to Cambridge, here is a quick recap of what I have been doing for the past couple of months.

It looks like it is becoming a tradition - another vacation ends with a guitar video. This time - a short slow blues in Stefan Grossman's style. The usual apologies for the sound, video and playing quality apply.

I was accepted as a student member to the Chartered Institute for IT (former British Computer Society). For the next two years (at least) I should be reachable through this e-mail: manfredas.zabarauskas@bcs.org.

Without getting into the gory details, the outcomes of the Lent (read: second) term in Cambridge can be summarized by:

I am still extremely enjoying it, even though the amount of my spare-time has decreased. (As an afterthought - I still had time to play basketball for Blues, Lions and my college, so maybe it was not that bad).

Over the summer I will be working as a Technology Analyst for Morgan Stanley, in their Innovative Data, Environments, Analytics & Systems (IDEAS) group.

During the interviews Morgan Stanley really left a very good impression both at the level of knowledge of the people working there and the communication and culture inside the company. We will see if that applies in day-to-day situations. In any case, I have nothing against spending the summer in Canary Wharf and seeing the investment banking industry from inside.

It will surely give me more things to write about in this blog, so be sure to check back once in a while.

END_OF_DOCUMENT_TOKEN_TO_BE_REPLACED

Another vacation, another video - as usual, apologies for the sound, webcam and playing quality. Three days left 'till the journey back to Cambridge. 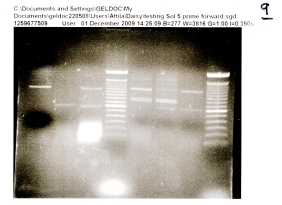 Vacation status: haven't even touched anything related to Computer Science. On the other hand, brushed up on complex trigonometry/logarithms and series expansions (read: maths), and feel reasonably happy to discuss plant evolution through polyploidy (read: biology, see: picture on the right).

Post-vacation status update: apparently I did have to discuss plant evolution through polyploidy in my exam! What were the odds...

Anyway, here's the video. Oh, yes, and while we're at it - happy New Year to you all.

The main purpose behind writing this tutorial was to provide a more detailed set of instructions for someone who is trying to implement an eigenface based face detection or recognition systems. It is assumed that the reader is familiar (at least to some extent) with the eigenface technique as described in the original M. Turk and A. Pentland papers (see "References" for more details).

The idea behind eigenfaces is similar (to a certain extent) to the one behind the periodic signal representation as a sum of simple oscillating functions in a Fourier decomposition. The technique described in this tutorial, as well as in the original papers, also aims to represent a face as a linear composition of the base images (called the eigenfaces).

The recognition/detection process consists of initialization, during which the eigenface basis is established and face classification, during which a new image is projected onto the "face space" and the resulting image is categorized by the weight patterns as a known-face, an unknown-face or a non-face image.

To download the software shown in video for 32-bit x86 platform, click here. It was compiled using Microsoft Visual C++ 2008 and uses GSL for Windows.

First of all, we have to obtain a training set of

So just capturing everything formally, we want to obtain a set

Once we have that, we should change the representation of a face image

-dimensional space. Now here is how we do it: we concatenate all the rows of the matrix

into one big vector of dimension

. Can it get any more simpler than that? END_OF_DOCUMENT_TOKEN_TO_BE_REPLACED

Due to the fact that I have found time to record these videos, I'm starting to suspect that my vacations have prolonged quite a bit... And I still have more than a week left.

Status update: apparently I have been awarded the Simon Gray prize by the Department of Philosophy at the University of Edinburgh. That, a KAL industrial scholarship, a couple of other prizes... I almost regret having decided to leave.

Anyway, here's the video. Try to figure out which is worse: my playing or my webcam's video quality.

As I have promised earlier, here's the second part of my impressions about the individual courses in the first year of Computer Science and Artificial Intelligence at the University of Edinburgh. Hopefully you will find it useful, e.g. when choosing your outside courses, preparing for the exams or simply getting a taste of the CS undergraduate life in the University of Edinburgh.

Once again, please bear in mind that all what is written below represents only my personal opinion.

Innovation and Enterprise for Scientists and Engineers
Professor: Khaled Benkrid

Lectures: a brilliant introduction to the main components and aspects of modern entrepreneurship, definitely one of the most interesting business courses that I’ve been to so far. Not only will you get the basic theoretic concepts of the modern business (like industry, marketing, operational, financial analyses, risk assessment), but you’ll also put them into practice while writing a business plan for your own idea, which will then account for 50% of your final grade.

What’s more, you’ll get the guest talks of local entrepreneurs (either spin-offs from the university, or related in some other way), an overview of the legal system regarding UK start-ups and businesses (PLCs, sole-traders, etc) and on top of that – it will all be related to the science and engineering (with Dr. Benkrid being a computer scientist himself!).
All in all – a highly inspiring, exciting and recommended course!

Exam: well… it all can’t be that interesting. END_OF_DOCUMENT_TOKEN_TO_BE_REPLACED

So, it's finally official. In less than two months time I'll be reading Computer Science at the University of Cambridge, Wolfson College. Hopefully that's the last university in my universities chain - all in all there are not many better places to go to. Not many at all.

I'm already looking forward to it. To the legendary supervision sessions, to the world class experts in the field, to the competitiveness amongst the students. I'm sure I will finally arrive at the place where I'll be the average guy between the best one's... not the other way around.

(I'm not convinced that the latter applies to the basketball team, though. Well, I guess we'll find that out pretty soon). 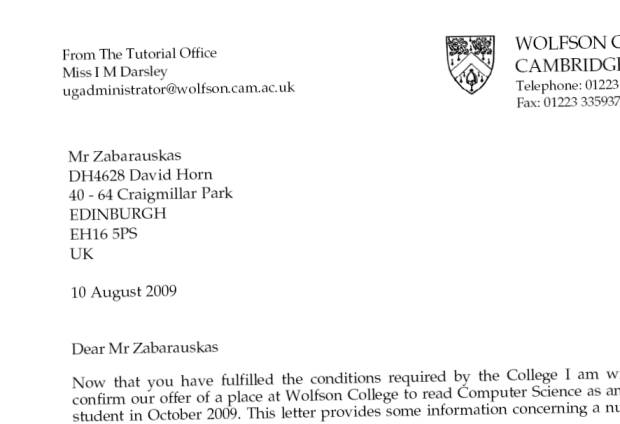 The exam results came back and the first year is finally over, therefore I have decided to share my impressions about the individual lectures in the first two semesters. Hopefully it will help someone to choose one subject over another, not to make the same mistakes when preparing for the exams that I did, or simply to get the taste of the first year in college. Please bear in mind that all what is written below represents only my personal, highly subjective opinion. Lectures: a wonderful introduction to the functional programming. Amazing teaching skills and professor's authority in the classroom - from ripping a T-shirt to reveal a big superman-lambda, to being one of the principal engineers and designers of the Haskell programming language - 10 out of 10.

Exam: Final grade is made by a programming class test (10%) and a final exam (90%). The programming class test is pretty straightforward - three simple tasks to test one's basic knowledge of Haskell (things you need to know are the syntax, because it's done on paper, list comprehension, recursion and simple library functions). The final exam is done in front of computer with plenty of time (2 hours) for three simple tasks (e.g. take a list of integers and return the sum of the cubes of the positive numbers in that list). The only catch is that the same problem has to be solved in a couple of different ways: using basic functions, using list comprehension, using recursion and using the higher-order functions, however... at the end of the day - it's still the same problem.

My advice in succeding in this subject: participate in the class' programming competition (see this years competition and my entry). If you'll manage to get something done - you won't need to spend any more time to prepare for the final exam, and I can hardly imagine how you'd get less than an A (my personal result - 99). END_OF_DOCUMENT_TOKEN_TO_BE_REPLACED